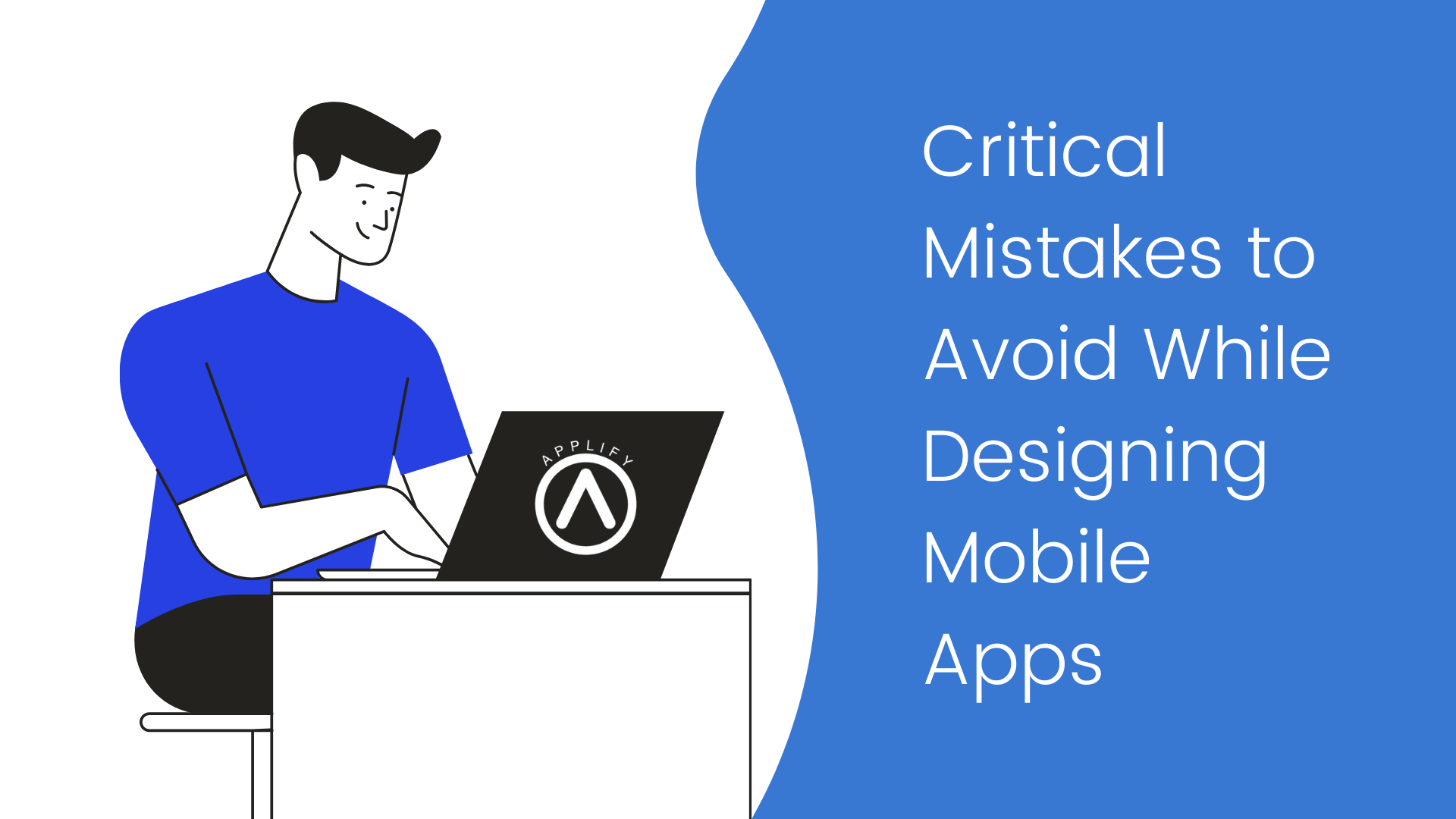 The app development industry has stood firm throughout the years. Even in 2020 when the world was hit by a global pandemic, and several businesses went collapsing, it is one industry that stood its ground and kept on making new advancements and generating profits in the crisis.

Today when everyone owns a smartphone, a mobile application is the easiest way to reach people. Having a well-developed application can set your business apart from the competition and at the peak of success. But there is a lot that goes into designing mobile apps that will deliver.

We have time and again talked about the importance and advantages of having a mobile app. Today we are going to touch down the mistakes that people make while designing mobiles apps. If not looked after properly, these mistakes can have costly, frustrating, and brand-damaging effects.

In order to develop a good functioning mobile application, it is important that you pay attention in the early stages of development. Just focusing on the big picture is not enough.

So grab a pen and paper, and jot down these 8 points as something you won’t ever do while designing mobile apps and their solutions.

1. Not Thinking About the End-User

Market research and end-user is an important aspect of any product development. But many times product owners are so obsessed with the ideas that they forget the end users completely.

Now we get it that you came up with this idea of your dream app and you are focused on your vision. But forgetting the people you are creating this app for is simply the most critical mistake you’re making.

The end-users are the ones who will decide the future of your application so it has to be about them as much as it’s about your idea.

Your choices and end-user choices have to be taken as two completely separate things. As the product owner, you have to find the middle ground and blend both things into one while designing your mobile app.

A user-centric UX design approach can do wonders for your application.

The success of an app gives rise to thousands of similar apps in no time. But there is a 95% chance that all those apps end up sinking in the pool of app stores.

This is what happens when instead of coming up with an innovative idea, people blindly copy the competitors without giving a second thought about the whys and hows of app development.

If your app doesn’t give anything different to the target audience, they don’t really have any reason to engage with it.

At the end of the day, it is your unique and innovative idea that will indulge the users. So brainstorm and come up with your own ideas rather than mindlessly copying others.

3. Not Communicating Clearly With Developers

Oftentimes you have a clear vision and you are just a development cycle away from launching your dream app. But the final product just doesn’t feel right.

This can be mainly because you didn’t communicate well with the developers or maybe you couldn’t explain your vision clearly to them. Just like any business, clear and upfront communication is an important aspect of app development as well.

Your ideas won’t come to life till the time the development team doesn’t see them as you do.

Sit with the developers and clearly communicate your ideas, visions, and goals with them. Be willing to answer questions as much as you can.

Remember, it’s going to be these people who will be developing the app so it is crucial that they get you. Also choosing a reliable and top app development company can do wonders for you.

User experience is the backbone of any mobile app design. If you are someone who thinks UX design is a one-time process and you won’t have to work on it again ever, think again!

A mobile application is only successful when it is liked by the users.

And you can only find the results once you have finished the launch and people interact with the app. UX is all about delivering a good experience to your consumers. So, a successful product owner should always pay a lot of attention to the process of designing mobile apps.

Treat UX as an ever-evolving process. Be prepared to work on it long after the product is launched. User experience can be constantly improved if you pay attention to your users.

You can achieve this by first launching a minimum viable product (MVP) to early users and gather their feedback.

It is not always correct that a fancy mobile app will be liked by users. Designing mobile apps that is simple and non-complicated can do wonders.

According to MobileAppDaily, a complicated UI and UX design are one of the top reasons why people uninstall an app. So having a complicated UI design can cost you more than you can think of in 2021.

Simplicity is the key to success. Especially in 2021. As people’s attention spans have grown shorter, they tend to dislike anything that takes time to understand.

Keep the user interface of your mobile app design as simple and minimal as possible. You can take small steps such as not adding over-the-top animations if it is to interact with the users frequently. So, consider it as one of the most important design mistakes to avoid in 2021.

Apart from a complicated and over-the-top UI design, there is one more mistake that is common, which is building a mobile app overloaded with features.

Now everyone wants to give the end-users the best possible experience and many features seem to be a great idea from the business point of view. But for the users, it can be confusing and overwhelming.

Too many features in your app may also come across as a lack of clarity about the strength of your brand.

Filter your feature ideas. Only add those features to your app that is most relevant to the idea and leave the rest. The features you add to your mobile application should make sense as to why it is needed. Irrelevant features will only perplex the users.

Another critical mistake that people make is not giving enough test runs to a mobile app before its final launch. Quality assurance and testing is one element of the development process you cannot afford to overlook.

Testing a product with a group of people helps you gather feedback that can help you take better and smarter decisions towards a breathtaking UX.

Iterative testing is an important part of delivering a successful mobile app. Always make sure that you add this point in the strategy while developing a mobile application. A good quality assurance team can help you test app features, modules, or classes individually.

At Applify we understand the value of testing and have a QA team of dedicated testers who make sure your app has a smooth performance.

User feedback is the best thing that can happen to you your app development project. And ignoring it is the biggest design mistake to avoid.

Whether it is about the worst graphic design mistakes or that feature you left hanging, you can always get it right by following suggestions from the consumers.

You can never convince your target audience to love your app without eliminating major pain points. And once users notice that you consistently ignore their feedback, they’ll find a substitute.

How Can I fix this?

By paying close attention to user feedback, app developers can easily turn casual app users into loyal customers. Hence go out of your way to gather useful user feedback. Test your ideas with the users and keep on evolving based on the feedback.

Developing a successful app can be really easy if you pay attention to the details and consider mobile app design best practices. Start by doing your research and then go forward with a development team that is experienced and dedicated to your project.

We hope that you’ve made note of the above-mentioned design mistakes to avoid. For an even better app development process, get in touch with Applify. Our developers are well acquainted with the laws of UX and work hard to deliver the best app solution for your business.

A pathway that UI/UX designers follow before designing your app

DAPPS: All You Wanted To Know(And Should)

Applify - November 2, 2018
0
What are DApps? In 2016-17 cryptocurrencies kicked up a storm, bringing Blockchain technology to the forefront. DApps or De-centralised apps are the application which is based...

Why Fintech is the Buzzword in Singapore?

Snigdha Sachar - November 20, 2018
0
Fintech or Financial technology is the use of technology in designing and delivering financial products or services faster and cheaper. According to a LinkedIn report,...

In-house development vs outsourcing: what’s best for your business?

Pawni Bharti - January 21, 2022
0
Whether you are an enterprise or a startup who is looking for development opportunities and digital products, you need to decide what’s...

Applify - April 8, 2022
0
Project managers are accountable for many responsibilities- planning, scheduling, managing resources, budgeting, and analyzing reports, just to name a few. It is...

Why Singapore is Facing Strong Domination of Blockchain in Fintech?

Vaishali Uniyal - October 28, 2021
0
Over the years Singapore has emerged as an innovation hub. With several big companies swiftly moving to Singapore and setting up camps,...